Last week, the California Department of Fish and Wildlife (CDFW) released the final “Butte Creek Spring-run Chinook Salmon Adult Monitoring Annual Report 2021.” With a very dry and hot year, 2021 was a tough year for salmon and other water-dependent species and Butte Creek spring-run were not spared from these challenges.

Looking at the data in the report, the final estimate is that 21,580 adult Butte Creek spring-run Chinook returned to the upper reaches of Butte Creek last year.  This was an incredible return – the largest in at least 65 years and more than double the average return since the habitat improvement projects were implemented in the creek during the mid-1990s.  Unfortunately, these fish returned in a year that was one of the hottest and driest on record.  Once they migrated into the upper reaches of the creek in such large numbers, they were crowded into limited habitat, where they were exposed to higher water temperatures and severe pathogen outbreaks. 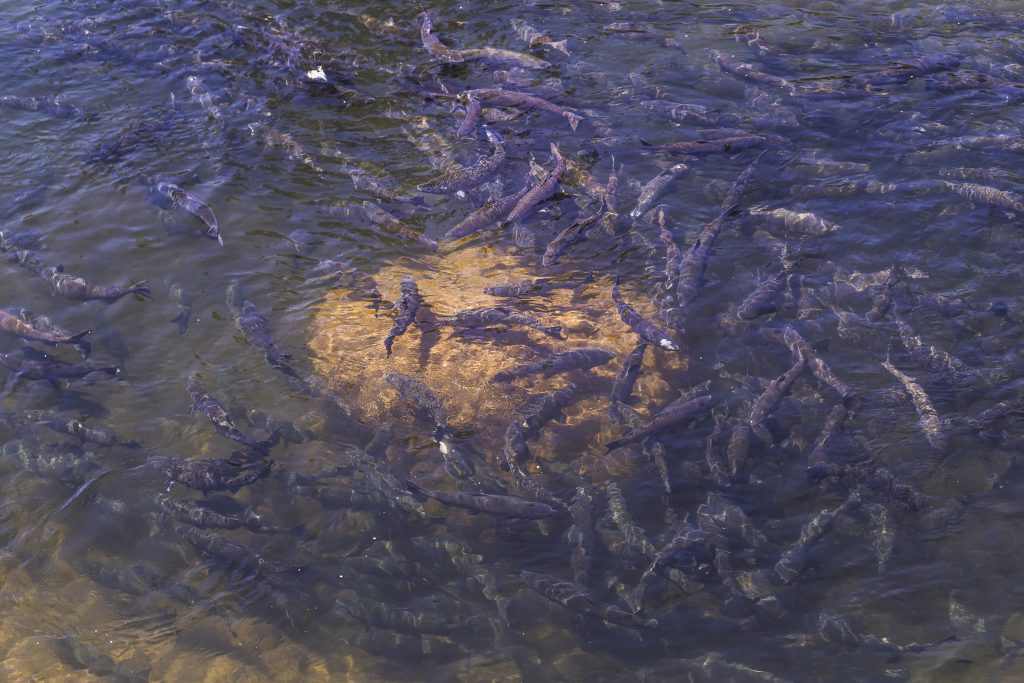 As CDFW describes in the report, “The 2021 adult [spring-run Chinook salmon] returning cohort was estimated at over 21,580, and based on field observations and survey estimates, the density of the population in the upper reaches of the holding habitat likely exacerbated the spread of pathogen transmission and contributed to the rapid spike in pre-spawn mortality. Adult [spring-run] populations returning to Butte Creek will continuously seek cool water to hold over the summer. As water temperatures rise due to drought conditions and climate change, the spatial distribution of holding populations will become more and more compacted within the coolest reaches, increasing the potential for larger pathogen outbreaks and mortality events in future years.” As a result, there were massive losses and 1,807 fish are estimated to have survived to spawn.  But, as bad as it was in 2021, those 1,807 spring-run Chinook are greater than the total number of spawning adults in any of the 30 years prior to the habitat improvements in the mid-1990s as you can see in the graphs on Butte Creek Salmon Recovery. This provides hope that the species will be able to rebound from this horrible drought year and the various improvements along the creek will continue to help salmon survival.

While some commentators are always looking for a scapegoat, there continues to be a concerted effort to improve conditions for spring-run salmon in all years. As I wrote last year, there are “those in the arena” who continue to work on physical solutions, taking chances and investing their time and resources to implement collaborative solutions to try and make things better for Butte Creek spring-run Chinook in future years.

Building on efforts over the past several decades, this past year NCWA, Butte Creek water managers, CDFW and other fishery agencies and conservation organizations Ducks Unlimited and California Trout began work to implement solutions to passage impediments in Butte Creek and the Sutter Bypass. This group identified the migration barriers that were exacerbated by the dry year, which include invasive aquatic weeds in the bypass, Weir 1, and a Lahar formation that creates extreme shallow water conditions during drought years. CDFW, with assistance from the Wildlife Conservation Board, was able to secure funding for the projects and various organizations volunteered to be project leads. Earlier this year, CDFW worked with the Department of Water Resources to remove aquatic weeds form the East Borrow Channel of the Sutter Bypass and work will continue to remove weeds from the West Borrow Channel. A proposal solicitation package has been released by the U.S. Fish and Wildlife Service to develop a preferred alternative to replace Weir 1 with a facility that will not impede fish. Ducks Unlimited is working as the project lead on the Lahar formation project and will begin work to determine the best alternative to improve passage. 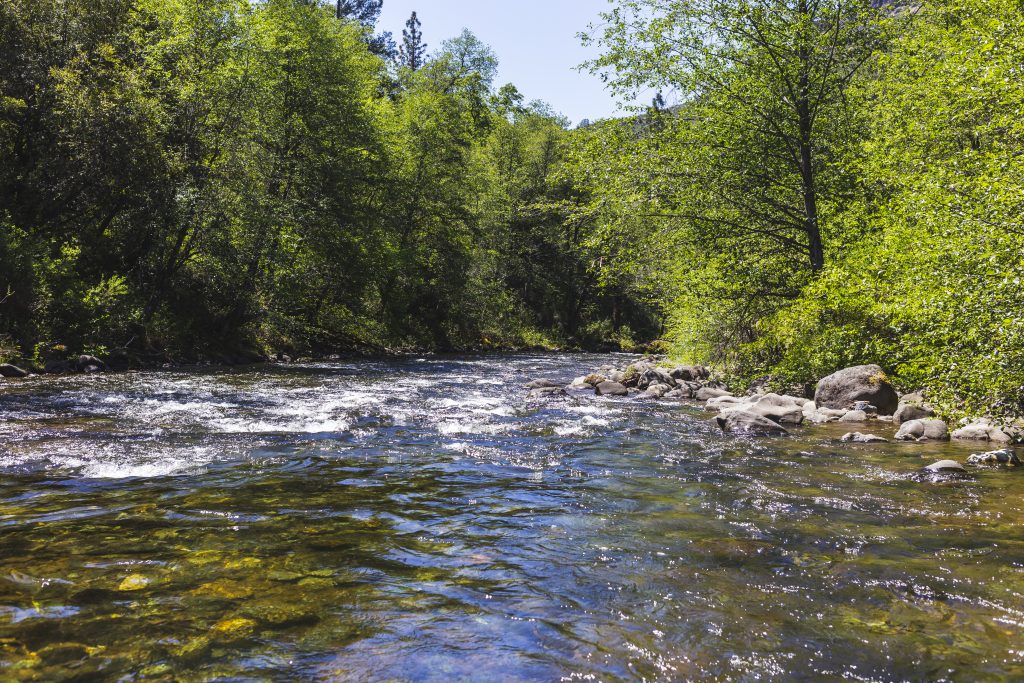 The Butte Creek water managers, state and federal fisheries agencies, conservation organizations and other interested parties have also formed the Butte Sutter Basin Coordinated Operations Group last year to provide a forum to discuss voluntary actions to enhance flows in Butte Creek at specific times to benefit migrating spring-run Chinook.  This effort builds upon years of water managers working with the fishery agencies to create ad hoc functional flows, and would create a more formalized process for determining the timing, quantity and duration of flows needed and the practical ability to provide flows in various water year types.  It is our hope that this work will further enhance the ability of spring-run Chinook salmon to navigate the migratory corridor in Butte Creek and improve their long-term chances for survival as we prepare for the next challenging years. 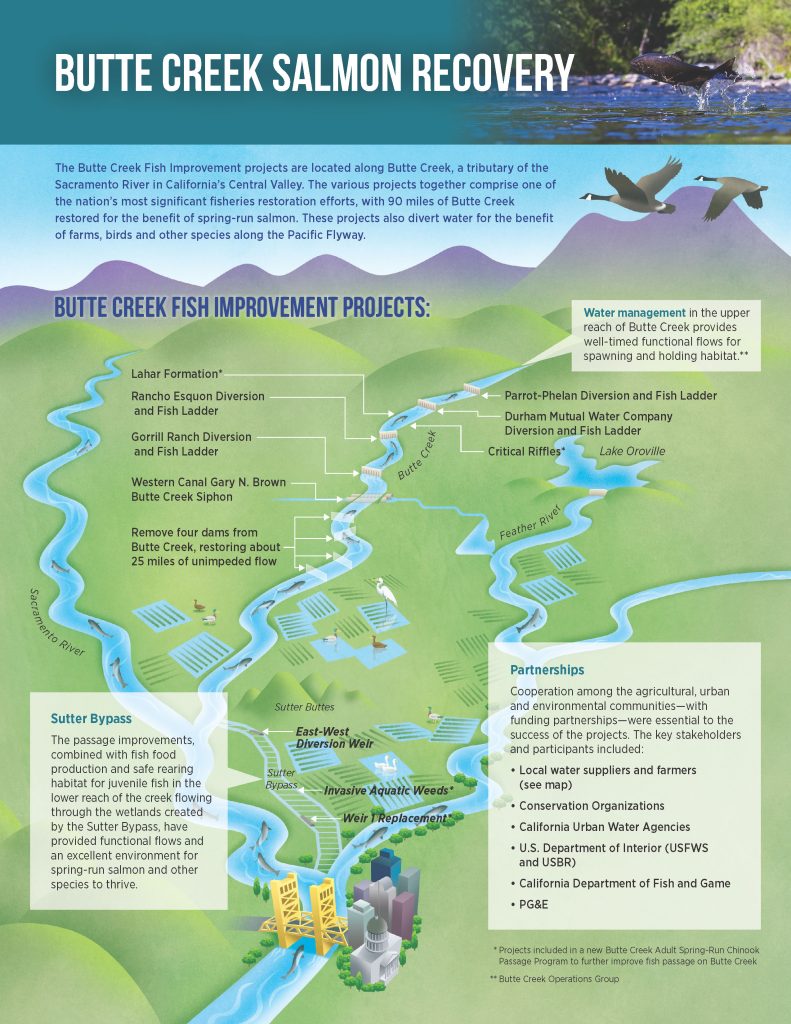