The Sacramento Valley has experienced serious flooding and droughts throughout its history, with extreme wet and dry years as shown in the chart below. Water resources managers in the region work hard to prepare for these different years and they then work through each year as it emerges. 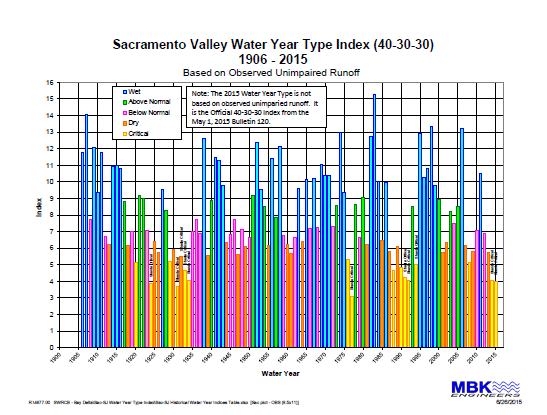 “Soon after the Gold Rush which exploded in the late 1840s, thousands of people who came to Central California followed a brief fling at the mines by moving down from the mountains to settle in the fertile Sacramento Valley. Here they shortly encountered a gravely threatening natural phenomenon. They discovered that during the annual winter cycle of torrential storms that for millennia have swept in from the Pacific, or in the season of the spring snow melt in the northern Sierra Nevada, the Sacramento River and its tributaries rose like a vast taking in of breath to flow out over their banks onto the wide Valley floor, there to produce terrifying floods. On that remarkably level expanse the spreading waters then stilled and ponded to form an immense, quiet inland sea a hundred miles long, with its dense flocks of birds rising abruptly to wheel in the sky and its still masses of tule rushes stretching from the delta to the Sutter Buttes and beyond. Not until the late spring and summer months would it drain away downstream.”
– Excerpt from Robert Kelley, Battling the Inland Sea (1989)

The Sacramento River has historically meandered back and forth across the valley floor as shown in the map below. Expansive flooding outside the river channel created an inland waterway that stretched across the floor of the Sacramento Valley, leaving the Sutter Buttes as an island. System-wide construction of flood management facilities, including dams, levees, weirs, and bypass channels began in the early 1900s. Over the years, state, federal and local government entities, and private citizens have performed these flood control actions. The system has allowed agricultural and urban development to flourish in the historic floodplains. Despite the fact that the Sacramento Valley flood control system is one of the most complex in the world, most of the facilities were constructed in response to a specific flooding problem with local protection in mind. Until recently, a system-wide analysis of the flood control system had not been undertaken. Weak points in the system have been exposed during catastrophic flood events in recent history, most notably the floods of 1986 and 1997.

In January 1997, Californians experienced one of the most geographically extensive and costly flood disasters in the State’s history. Major storms throughout the State caused record flows on many rivers. The flood management system for the Sacramento River was stressed to capacity and beyond. The existing flood management system prevented over $21 billion in damages in the Sacramento and San Joaquin River Basins and protected lives during the event. Even so, levees on the Sacramento River and its tributaries sustained two major breaks and were near failure at many locations. Statewide, the flood overwhelmed major parts of the system, resulted in loss of human life, and caused over $1 billion in property damages.

The recent CVFPP Update was officially adopted in August 2017 by the Central Valley Flood Protection Board and serves as a long-range plan that guides the State’s participation in managing flood risk in the Central Valley. It will guide investments in multi-benefit flood projects over the next 30 years.

The RFMPs, flood atlases, and contact information for the three Sacramento Valley plans are available:

While the flood protection system is designed to protect people and property from flooding, there are now efforts to re-imagine the historic floodplain in the Sacramento Valley to improve fish, wildlife, and farming. See Reactivating our Floodplains and short films describing efforts to reactivate the floodplains as a new way forward.

Additional information can be found at:

The following document provides a snapshot of 2015 in the Sacramento, with significant reductions in water supplies throughout the region. 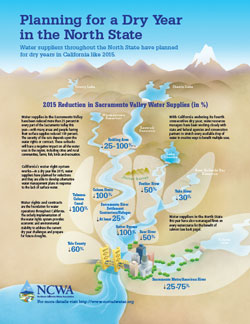 The following document describes recommendations based on the experiences in the region in 2014.