Northern California is home to over 3.7 million people, from the urban center of Sacramento to small rural farming communities scattered throughout the valley. Of the nearly 4 million people, almost 600,000 live in a disadvantaged community. NCWA and the leaders in the North State are working together to carry out a ridgetop to rivermouth approach to providing clean, healthy water throughout the region, including working to provide access to safe drinking water for all. 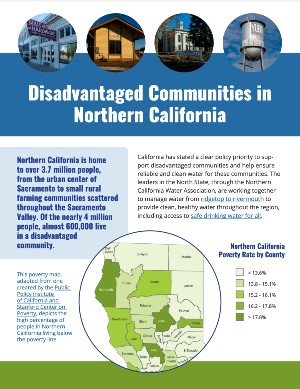 The map below shows varying poverty levels throughout the state. This map was designed by the Public Policy Institute of California, in conjunction with the Stanford Center on Poverty and Inequality. Together, they created the California Poverty Measure, or CPM. The CPM uses, on average, $35,600 as the poverty line for a family of four while also adjusting for differences in cost of living and access to social safety net resources. The percentages refer to the amount of people living at or below the CPM.

To learn more about poverty in California, click here.

What are Disadvantaged Communities?

Where are Disadvantaged Communities?

The Department of Water Resources created a DAC Mapping Tool shown below. This interactive map identifies Disadvantaged Communities and can be clicked on and filtered by Census Place, Census Tract, Block Groups, Prop 1 Funding, Hydrologic Regions, and IRWM Regions. Click HERE to use the map. 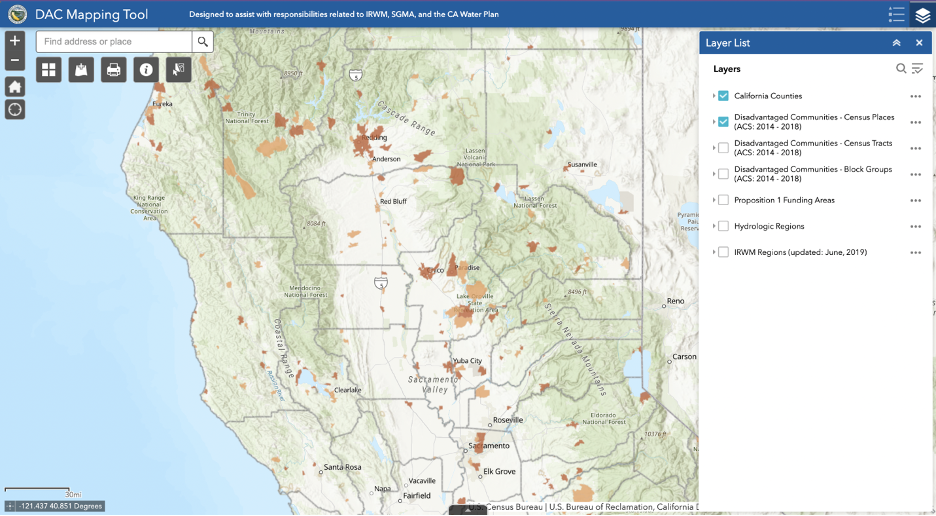 Using the DWR Mapping Tool, the following are a list of DACs in Northern California, with the Severely Disadvantaged Communities highlighted:

What programs are available to help DACs?