As 2021 was shaping into the most challenging water year in recent history—with the driest and hottest conditions anyone could remember–water resources managers in the Sacramento Valley developed a “roadmap” in May, outlining plans to maximize habitat for fish in wildlife with the minimal water resources that were available.  At that time, water managers in every part of the Valley knew they were going to see substantial reductions in their water supplies and they were developing and implementing drought plans to manage the limited supplies available.  Now, we have an opportunity to look back at this challenging year and evaluate the actions that were taken to determine the value they provided to fish and wildlife in the region and what we can learn for future dry years. 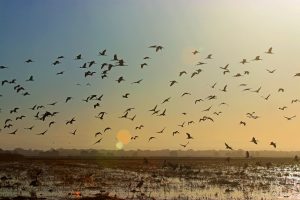 Birds and the Pacific Flyway

The drought and pressure to hold more water in the reservoirs created a substantial decrease in irrigated Pacific Flyway habitat in 2021.  Level 2 Refuge water supplies were cut by 25 percent and around 150,000 acres of rice, which provides a majority of the food for waterfowl in the Sacramento Valley, were fallowed.  Water managers and Refuge managers coordinated actions to provide as much habitat in the Valley as possible with the extremely limited water supplies available. Following the Governor’s Executive Order, landowners and conservation organizations implemented an incentive program to use groundwater to irrigate habitat in the fall, when very little habitat was available in the region.  This program, the October rains, and timely lifting of Term 91 by the State Water Resources Control Board to allow for surface water deliveries once there was adequate water in the region’s waterways, provided important Pacific Flyway habitat in the region, which avoided significant bird deaths from disease or other drought-related causes.

In 2021, we learned that we cannot assume that there will be surface water supplies in the fall and early winter months during drought years to irrigate Pacific Flyway habitat.  Increased carryover storage requirements and limitations on surface water deliveries will further impact the availability of these environmental supplies.  In addition, the programs established to provide incentives to flood up habitat using groundwater can provide limited, but very valuable acres of habitat to help the flyway species and need to be included in future drought planning efforts, particularly as a bridge to the rains that typically come in the winter.

Water resources managers in the Sacramento Valley implemented voluntary actions to improve the quantity and timing of flows in the Sacramento River to improve habitat for winter-run Chinook salmon.  These actions were especially important this year, as there was a substantial return of adult winter-run and the Valley temperatures were exceptionally hot.

Importantly, fish were observed in 2021 in the rivers using the many habitat projects that have been implemented since the last drought.  These projects likely contributed to the improved survival of the species compared to the last drought year in 2015.  For the endangered winter-run Chinook that spawn in the Sacramento River, the monitoring in 2021 revealed much better results than the “total loss” of the run that was predicted by many in the spring. To summarize, 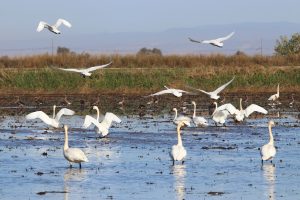 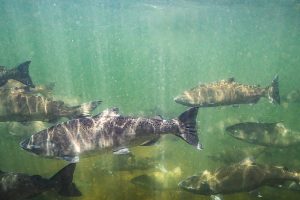 In 2021, we learned that even in the most severe dry years salmon will take advantage of the flows and habitat provided to them and, rather than wasting energy dwelling on doom and gloom scenarios, we should instead go to work with our partners and make the investments to improve conditions for salmon in the rivers and floodplains, creating much-needed benefits for Chinook salmon in the worst water years, and increasing species survival.

Dry years and prolonged drought are increasingly likely as we experience the effects of climate change.  Learning from past dry years and implementing drought programs and habitat improvements to provide the most benefits for fish and wildlife with the limited water supplies available will hopefully soften the impacts of drought in the future. This year we learned the value of early planning; the importance of collaboration with state and federal agencies, conservation partners, and landowners; and the importance of the robust recovery programs underway in the Sacramento Valley for birds, salmon and Giant Garter Snakes, which seem to be providing value in these dry years.

Water managers in the Sacramento Valley will continue to work with various partners to refine and improve their drought programs to better provide water for all beneficial uses in the region in dry years to come. If you have any additional suggestions to help the region better prepare for future dry years, please let us know at info@norcalwater.org.

One thought on “Managing for Fish and Wildlife During a Dry Year in the Sacramento Valley – What Did We Learn in 2021?”