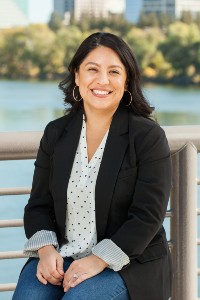 Danyella Ochoa is the magic that makes NCWA a leader in California. From her professionalism to her personality, to her ability to manage multiple important projects to the day to day and year over year efforts of NCWA.

Danyella manages the NCWA Sacramento office and is keeper of the keys to functionality and production at NCWA. A trusted voice tied to an experienced background typically means that Ochoa is often the first person consulted. She joined NCWA in 2008 as an assistant and learned the nuances of water and helping coworkers. Then was asked to help the State of California Department of Finance’s Financial Information System for California, known as FI$Cal. She was the eyes and ears for the Director of Fi$Cal, working with multiple agencies and departments tied to Fi$Cal, where her professionalism and hard-working attitude lead her back to NCWA.

Ochoa comes to NCWA from San Jose where she grew up seeing first-hand the value of water in the South Bay. She met her future husband, Abel, and they began a beautiful family with three children. The family is proactively engaged in the Juvenile Diabetes Research Foundation who works to seek a cure for Type 1 diabetic children.